Hello again!  I hope you all had a good week.  My week didn’t start off all that great.  I’m collaborating with a friend to create a kimono based video for youtube (she’s a fantastic video editor).  While I was casually flipping through my notes, my heart sank.  I realized that I had used the wrong word to describe a garment.  What a goof on my part!  It only got worse when I messaged her and she said she no longer had the editable versions of the section in question.  AHHHH!  However!  When we got together on Friday, we found the autosaved edits on her external harddrive.  Thank you Adobe gods!

I managed to post about a couple of new motifs this week too.  I’ve decided to expand my geometric patterns section, so I added asa no ha and same komon to the list. 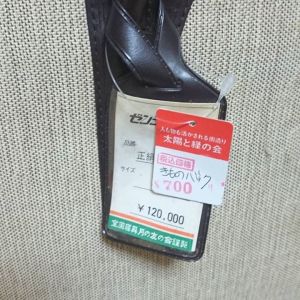 Photos or it didn’t happen, right?

Finally, I went kimono shopping with a friend of mine and managed to grab the steal of the month!  I gorgeous kimono bag in great condition that was originally 120,000 yen, and I only paid 700 yen.  I was really lucky that I spotted it before my friend.  One of us would have gotten it in the end.

Have a good week!

The bottom is a separate compartment for your zori. 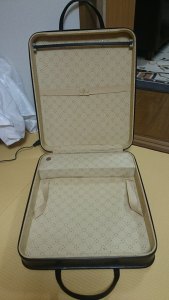 In the top half, there is a built in hanger for your kimono.